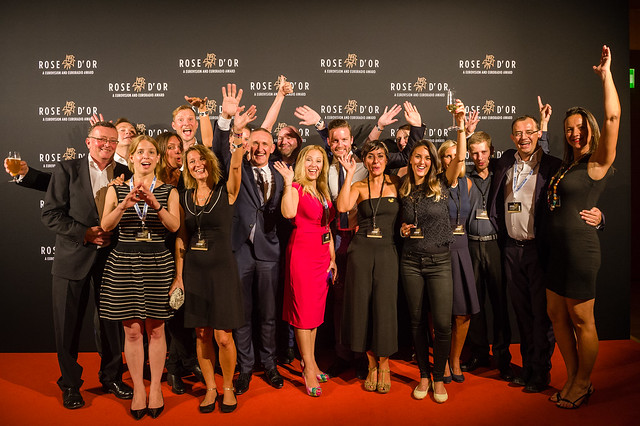 The best in TV and radio entertainment programming has been honoured on the September 19 at the 56th Rose d’Or Awards held at Axica in Berlin.

Rose d’Or trophies were presented in ten categories including for the first time, Virtual Reality, TV Movie and Children & Youth.

Speaking from Los Angeles, James Corden said he was “truly honoured” to receive the inaugural Entertainer of the Year award. “It truly means the world to me,” he said before dedicating the award to his team on CBS’ “Late Late Show” which he hosts. “The truth is, I am only a small part of entertaining so I accept this on behalf of all of our crew.”

Also sending greetings from the US, Dame Angela Lansbury said she was “deeply honoured “ to receive the Lifetime Achievement Award for her outstanding contribution to the entertainment industry. “I’ve enjoyed a career spanning 75 years but being in “Murder, She Wrote” has made friends for me all over the world.”

The ceremony, held at the Axica venue next to Berlin’s iconic Brandenburg Gate, was attended by around 400 industry luminaries and hosted by BBC presenter Paddy O’Connell.

The Director of Media at the European Broadcasting Union, which runs the awards, Jean Philip De Tender praised the standard of entries in 2017: “For nearly 60 years the Rose d’Or Awards have recognised the very best in global entertainment content. Over 400 programmes from more than 130 broadcasters and production companies in 33 different countries were submitted for this year’s awards. Our winners, and indeed all the nominees, tonight truly represent the gold standard of entertainment.“

The Rose d’Or Awards are one of the world’s most prestigious awards for entertainment programming.