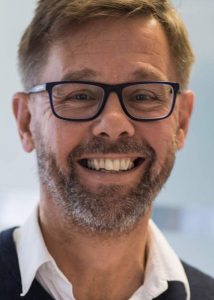 Christian Wikander joined HBO Europe in September 2020, taking on the role as commissioning editor and VP original programming for the Nordic productions. Wikander’s extensive credits from the TV industry includes head of drama at SVT and serving as executive producer on shows such as The Bridge, Real Humans, The Restaurant, Bonus Family, Spring Tide and Jordskott. As head of drama and entertainment at SVT West (Gothenburg) he amongst other things brought Sweden’s longest-running gameshow On Track into a modernized version reaching new audiences, and commissioned International Interactive Emmy awarded drama The Truth About Marika. As producer and director, Wikander run SVT’s flagship drama High Seas for 3 years. He was also one of the founders and CEO of TV Spartacus, one of the first successful independent production companies in Sweden, where he served as creator, producer and writer of Hotel Caesar, Seven Sisters and Three Crowns – three of the most watched series in Scandinavia to date. Most recently and before joining HBO Europe, Wikander headed drama at London based Twelve Towns, including development and production of original premium dramas such as The Child in Time.