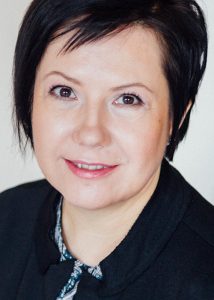 Since 2013, Ieva Rozentale is the Head of Culture of Latvian Television. She has worked as a producer of various types of music programmes and daily live cultural programme, editor of documentaries and classical music concerts and cultural journalist. For six years (1999-2005), ceasing her work in the television, Rozentale was the editor-in-chief of the only classical music magazine in Latvia.
She has studied musicology (music history, music theory and piano playing) at the Latvian Academy of Music, which was followed by MA in Arts at the Latvian Academy of Culture and European Diploma in Cultural Project Management (international studies). She teaches media producing at the Riga Stradiņš University, Latvian Academy of Music and episodically continues writing articles and concert reviews for Latvian media. She is a regular member of the panel of judges of the the International Emmy Award, Latvian Great Musical Award, Latvian Music Records Annual Award and Latvian public media culture award “Kilograms kultūras”.
Rozentale has received awards in the television and film industry in Latvia as a producer and script writer of cultural documentaries (The Best TV Documentary of the year 2014 in Latvia ”Lielais Kristaps”, Latvian Great Folklore Award etc.). One of her recently produced successful projects was the live broadcast of classical music concert ”Born in Riga”, provided in cooperation with ZDF/Arte and broadcasted in several European countries.
Ieva Rozentale was the Executive Producer of “Eurovision Choir of the Year 2017” and “Eurovision Choir 2019” – the television competition for choral singers, organised by the European Broadcasting Union (EBU) and Interkultur 2017 in Riga, Latvia and 2019 in Gothenburg, Sweden.