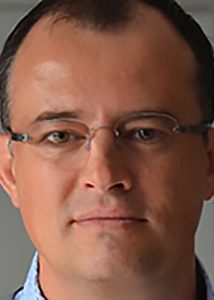 Jeroen Depraetere (45) is born and raised in the world of media.
Jeroen remembers playing hide and seek as a boy in the studio stages of his father’s TV-productions. After his economy and communication studies, Jeroen started working at the public radio, but quickly changed gear to television. As a producer, he realised televised game shows and magazines, growing towards major live events like fundraising shows and award ceremonies.
Jeroen explored the international dimension of television as executive supervisor of the Junior Eurovision Song Contest, Eurovision Young Musicians and the Eurovision Dance Contest. He founded the Television Academy of Flanders to reward best talent and television programs. And he was managing director of a production company, part of Sony Pictures Television International.
Currently Jeroen continues his creative journey as Head of Eurovision TV and Future Media at the European Broadcasting Union exploring the collective rights acquisitions for fiction and developing models for international co-productions.
Jeroen is married and has 2 sons. He loves good food, nice company and still enjoys watching television. His favourite catchphrase is ‘The difference between men and boys, is the price of their toys’.