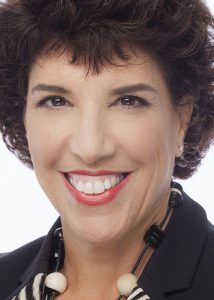 Joy Rosen is the CEO and Co-Founder of Portfolio Entertainment, a Toronto based media company.
Launched in a spare bedroom with a borrowed typewriter twenty-eight years ago, she and partner Lisa Olfman have transformed Portfolio Entertainment into a powerhouse specializing in the production, distribution and animation of kids and family entertainment for television and digital media content platforms.
Joy has spent her career, forging international partnerships. She is at the forefront of Portfolio’s corporate development strategy and also leads its export strategy, overseeing all aspects of the business including sales and
acquisitions. Portfolio’s distribution arm is a global player recognized for intelligent deal-making and enduring relationships with broadcasters, digital platforms and content providers. Its diverse program catalogue now boasts over 2,000 episodes of animation, kids, scripted and digital media content.
Joy recently cracked the Chinese market, successfully selling its animation series to major SVOD platforms and initiating co-productions with recognized Chinese production companies.
Joy’s Executive Producer credits include the soon to be released animated series Hero Elementary, the Emmy® award-winning series The Cat in the Hat Knows A Lot About That!, Freaktown, DOKI, Carl Squared, RoboRoach, For the Love of Dog and the television movie Stolen Miracle. Portfolio is now expanding into new genres of production with projects in primetime, digital and comedy.
Strategic vision and incorrigible optimism lead the partners to a multi-faceted expansion in 2015, with the launch of Portfolio Animation, a state of the art animation studio. Additionally, the company attracted a key senior management team, diversified its slate, amped up production output and relocated to vibrant new headquarters in downtown Toronto. Portfolio established an Innovation Tech Lab to continue its experimentation in new production techniques, animation pipeline efficiencies and pushing creative boundaries – with the objectives of enhancing quality and tempering costs.
Rosen, together with Olfman, has won the 2015 WIFT-T Crystal Award for Outstanding Achievement in Business, Rotman Canadian Woman Entrepreneur of the Year Award, and was named in Profit Magazine’s Top 100 Female Business Owners and Animation Magazine’s Top 25 Rising Women in the Business lists.
Joy holds a Master of Science degree in Telecommunications/Film from the Newhouse School of Public Communication at Syracuse University and a BA in English from the University of Toronto.