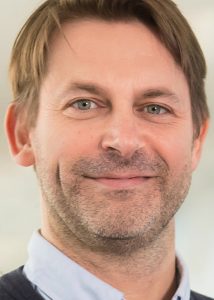 Olivier worked for nearly 17 years for one of the most influencial and succesful Belgian production companies, called “Woestijnvis”.  As a television maker he has co-operated at some very memorable moments of television with several program hits, all broadcasted on VRT.  In 2006 he became program director at Woestijnvis and had a very important contribution in the relationship and collaboration between the production company and VRT.
Because of his skills as a creative television maker and his excellent people’s management, he was asked in 2014 to lead channel “één” for National Belgian Television (VRT).  And since 2018 he is also managing “Canvas”, the second channel of VRT.  Where as “één” is a broad and popular family channel, “Canvas” is a versatile channel for viewers who seek content without any compromise. The two channels are complimentary to eachother, a combination which suits Olivier just fine.