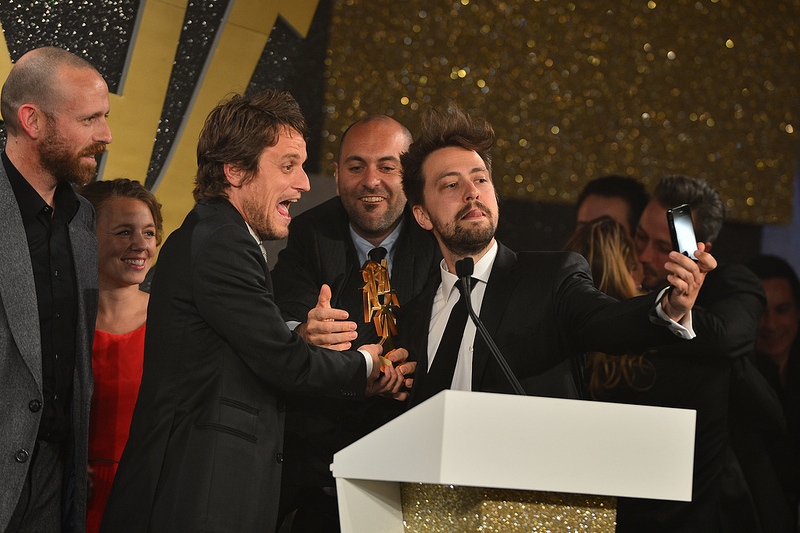 What a night… hosted by the inimitable Lucille Werner wearing a beautiful dress designed by renowned Dutch designer Addy van den Krommenacker, she fully embraced the significance of winning – and wearing – the famous Rose d’Or.

Head of the Game Show jury and previous Rose d’Or winner, Remco Garcia, presented the award to ‘Oh Sit!’ which was accepted by Phil Gurin of the Gurin Company.  Expressing genuine surprise at the win, he urged the audience, “Please buy this for your territory; it’s really fun!”

Indriena Basarah, Head of the Reality & Factual Entertainment jury presented the award to film maker Heenan Bhatti of Love Productions for the programme, ‘Make Bradford British.’  The jury’s feedback stated that the program touched the heart and has the potential to be successful in many other countries.

The award for the best Sitcom was handed out by jury member Corinna Scholz to British Sky Broadcasting programme ‘Spy.’  Accepted by Hat Trick Production’s Charlie Leech, he thanked both the “fantastic cast and the fantastic crew” for the accolade.

Head of the Arts jury, François Duplat presented the award to ‘Freddie Mercury: the Great Pretender’, which was accepted by Joss Crowley of Eagle Rock Productions.  “We scoured the earth for every single piece of archive footage and were thorough in our film research.”

The Entertainment category award was presented by head of jury and 2012 Rose d’Or recipient Jörg Grabosch to ‘Gruen Sweat,’ which experienced a slightly Kanye West-esque interruption by the zany Jandino Asporaat, who joked that he’d spent a lot of money and travelled a long way to be there.  Australian Broadcasting Corporation’s Head of Entertainment Jennifer Collins shot back with, “I came further.”

Kelly Luegenbiehl, Head of jury for the Comedy category, presented the Rose d’Or to Belgium’s ‘What If?’ programme.  It seemed like the entire team of actors, writers and producers converged together to accept the award.  With royal family members Princess Astrid and Prince Lorenz in attendance, it was a good night for Belgium.