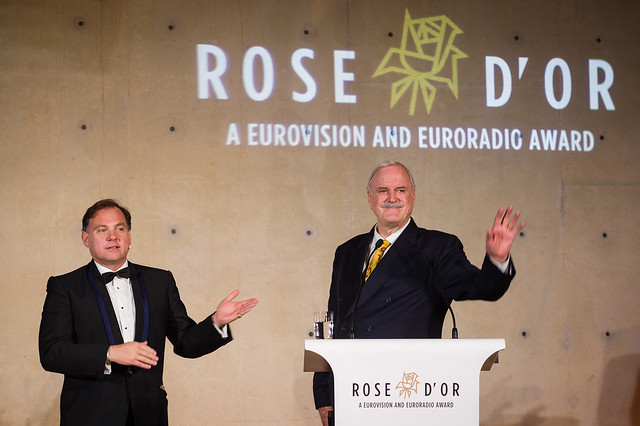 The best in TV and radio entertainment programming has been honoured on September 13 at the 55th Rose d’Or Awards held at Axica in Berlin.

Rose d’Or trophies were presented in eleven categories including Comedy, Game Show, Arts and Talk Show following a record-breaking number of entries. Radio awards were included for the third time in the event’s 55 year history.

British actor John Cleese was honoured with a lifetime achievement award for his outstanding contribution to the entertainment industry.

In an acceptance speech peppered with anecdotes from his career, including the making of “A Fish Called Wanda” and “Monty Python’s The Life of Brian”, Cleese made a plea for executives to trust performers and writers: ”When Monty Python was commissioned we didn’t really know what we were going to do but we were trusted. The talent has a better record than the suits so why don’t they bear that in mind?”

The Director of Media at the European Broadcasting Union, which runs the awards, Jean Philip de Tender said the standard of entries in 2016 was excellent: “Once again the Rose d’Ors have showcased the very best in global entertainment content. This is a key industry award. Taking home a Rose d’Or is still something programme makers aspire to and I congratulate all the winners – and indeed all the runners up who gave the juries a tough job.”

The Rose d’Or Awards are one of the world’s most prestigious awards for entertainment programming.