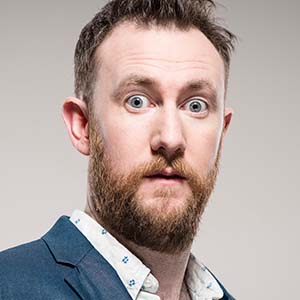 Europe’s premier TV and audio entertainment awards are delighted to announce that Alex Horne the award-winning comedian, author and podcaster, will host this year’s Rose d’Or Awards, the 61 st annual ceremony, which streams on 28th November 2022 online and live to the first night of Content London.

Alex is the creator and co-host of the hit TV Show, Taskmaster, which was nominated for a Rose d’Or Award last year.

With over 100 UK episodes, an Emmy-nomination and a Royal Television Society Award under its belt, Taskmaster is also a hit in a dozen markets around the world, including New Zealand, Portugal, and Croatia. In Sweden Taskmaster won Best Entertainment Programme of the year. Alex is also the creator and frontman of The Horne Section, a six-piece band of multitalented musicians. The Horne Section TV Show will premiere on the Channel 4 in the UK, this Autumn.

Alex said “I’ve administered many tasks over the past few years, many of which end up with me getting wet or naked. It’s an absolute honour to now tackle the task of presenting the Rose d’Or Awards, which have recognised so many TV greats across the years – and if I stay dry and fully clothed at the end of the show, that’s a bonus for everyone!“

There is just 3 days to go before entries close on September 24th. You can find out more and enter online by CLICKING HERE.