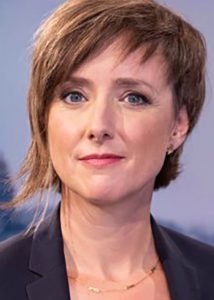 Annelies Beck is a journalist at VRT (Belgian public broadcast). She started out as a tv-reporter for VRT working both in Belgium and abroad, specializing in Brazil. For the past 15 years she’s anchored live current affairs programs in prime time on radio and television, always looking for a deeper and critical understanding of what’s going on both at home and internationally. She is currently one of the two presenters of TerZake, the flagship daily current affairs tv-program of VRT. The team of Terzake is keeping a keen and critical eye on new media and technologies to explore how they might help broaden the reach of solid reporting and critical interviews and debate.

Beck is also the author of two fact-based novels, one of which (on the plight of Belgian refugees in Glasgow during WWI) was made into a tv-documentary.