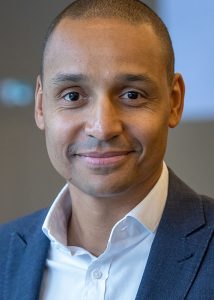 Bakel Walden joined the Executive Board of Switzerland’s biggest media house in January 2018. He took over the newly created role of Director Development and Offering and as Head of SRG’s Digital Board, focusing with his team on key issues of the core business. Main areas of work include digital transformation projects (among other things launching and running SRG’s streaming platform Play Suisse), user data analysis, communication, content partnerships, and international relations. Bakel looks back at 20 years of broadcasting experience. After completing his studies in Germany and France, he started as a trainee in the entertainment department of RTL Germany in Cologne. In his ten years at RTL Group, his roles included being a member of the strategy team at the Luxemburg Corporate Center and Head of Program Planning and Development for the Greek subsidiary Alpha TV. From 2012 to 2017, Bakel worked at SRG’s business unit in the German-speaking part of Switzerland as Head of Program Strategy. Among his responsibilities were strategic projects regarding program performance, expansion into younger target groups and the overall positioning of the channel group