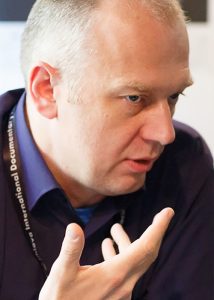 As Content Development Director of Czech TV, a public broadcaster, Jan oversees a group of 15 creative producers and approximately 500 projects in development in all TV genres, including drama, entertainment, factual and documentary, as well as children programs. His team is responsible both for in-house development and production, as well as commissioning from independent producers. In addition, the development team also manages co-production of cinema projects and international co-productions and presales.

In April 2020 Jan also became the head of new media projects of Czech TV, preparing a new organizational and process structure for web and mobile products.

The development team creates all premiere, non-acquisition content for four channels, representing, for example, over 100 hours of drama per year. In recent years, Czech TV consistently keeps a market share around 30% with high viewer satisfaction. Czech TV regularly co-produces with ARTE and broadcasters in Austria, Germany and Slovakia.
Previously, Jan worked as Content Development Director at CME Group, in print media and in information technology consulting.