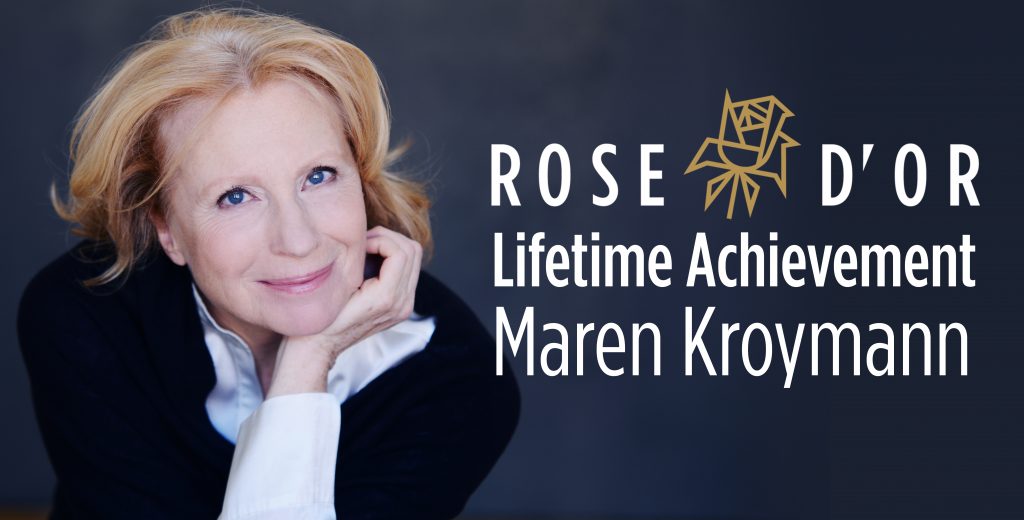 The Rose d’Or is delighted to announce that Maren Kroymann, the first lady of German TV comedy – the multi-talented actor, comedienne, singer and LGBT campaigner is to receive the Rose d’Or Lifetime Achievement Award for 2019.

The Award will be presented to Maren at the 58th Rose d’Or Awards to be hosted by Sir Lenny Henry, in London on December 1st.

On the news that she is to receive the Lifetime Achievement Award, Maren Kroymann said:  “I am overwhelmed and amazed that I will receive one of the most important international television awards. I am incredibly moved that my work of all these years is being seen and recognised through this award. This recognition means a lot to me.”

Maren Kroymann has been a star since 1982 when her first stage show Auf du und du mit dem Stöckelschuh (On an Intimate Footing with a Stiletto Shoe) pioneered a new form of satirical entertainment – TV soon knocked at her door. After starring in Oh Gott, Herr Pfarrer (Oh My God, Reverend)! and Vera Wesskamp she caused a sensation in 1993 as the first woman on German TV to host her own regular satire programme: Nachtschwester Kroymann (Night Nurse Kroymann). More than 50 great TV and cinema roles have followed.

In 2017 Maren Kroymann’s career reached new heights. 20 years after Night Nurse Kroymann she started her new satire show name, simply, Kroymann on Germany’s first channel Das Erste which has had a great reception from audience and critics alike.  Recent distinctions have been the highly respected Grimme Preis 2018 and 2019, Deutscher Fernsehpreis 2019 and Bayerischer Filmpreis 2019. Maren currently is on tour with her latest stage show In My Sixties.

Thomas Schreiber, ARD Head of Entertainment added: “The Lifetime Achievement for Maren Kroymann is so fantastic. Maren is loved in hit family series, comedies and cinema blockbusters; she’s broken new ground for all women in TV entertainment across Germany. In the last couple of years she’s hit the ground running on TV and social media with our series Kroymann. At 70 years young she’s ageless!”

The Rose d’Or awards were first given in 1961 in Montreux where the annual award ceremony remained for 40 years. Berlin has been home to the Rose d’Or for the past three years. Past recipients of Rose d’Or Special Awards include Joanna Lumley, Angela Lansbury, James Corden, Jan Böhmermann and John Cleese.

The prestigious Rose d’Or Awards define the gold standard for excellence and achievement in entertainment programming.

For more information on Rose d’Or and to book a ticket to the Gala Award Show on December 1 CLICK HERE.