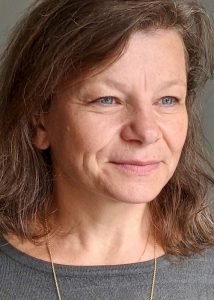 Marit Moi works for the Norwegian broadcaster NRK’s News Department in Oslo. Since 2015, Moi has acted as advisor and external relations manager. But her experience in NRK’s News Department dates back to 1991. During this time she primarily worked as journalist and international news coordinator with international news production and news sources. More recently she has acted as deputy team leader for news production managers and multimedia producers at NRK (2019-2021).

Moi has worked extensively with the EBU. She has acted as office manager for NRKs Eurovision News Coordinators for 16 years. She also had a stint in Geneva (2013-2014) as visiting News editor for Eurovision News Exchange. In addition, Moi has been a longtime member of EBU’s News Committee and its expert group, the Editorial Subcommittee.

Moi’s responsibilities at NRK’s News Department center around project planning and management of pool-arrangements for domestic and international media. She was for example responsible for organizing international distribution of news coverage of the 2011 terror-attacks in Norway. Together with the Head of NRK News, she received the EBUs Gunnar Høidahl award for excellence in the Eurovision News Exchange for NRK’s coverage. Moi also has long held responsibility for NRK’s international distribution of coverage of the annual Nobel Peace Prize announcement and ceremony, and related news. Her role here has included acting as production manager during interviews of Nobel Laureates in Oslo by foreign broadcasters (Al Jazeera as well as for BBC HARDtalk).

In addition, Moi has several other notable responsibilities at NRK. She is NRK News Department’s advisor on copyright. She follows up agreements from an editorial perspective and she participates during contractual negotiations with the News agencies. She also acts as an editorial coach for the members of the Multimedia producer-team responsible for a daily exchange of political, economic, and cultural news stories with the Eurovision News Exchange and especially among the Nordic members.

Moi holds a postgraduate degree (Cand. Mag.) in international Culture and Society from the University of Oslo.