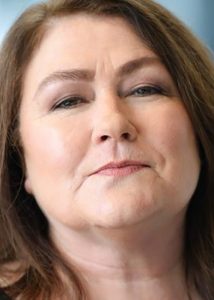 Sally Riley is the Head of Drama, Entertainment and Indigenous for the Australian Broadcasting Corporation (ABC Australia). Riley oversees the development and production of all scripted series for Drama, Comedy, Indigenous, and non-scripted vehicles for Entertainment.

A proud Wiradjuri woman, Riley is a leading advocate for Indigenous and diverse perspectives which champion the shifting cultures and attitudes of Australia today.

In 2010, Riley was appointed as the inaugural Head of the Indigenous Department at ABC Australia where she pioneered ground-breaking productions including Cleverman, Gods of Wheat Street, Black Comedy, 8MMM, The Warriors, and Redfern Now, the first series to be commissioned, written and produced by Indigenous Australians.

Following on from her successful tenure as Head of Indigenous, Riley was appointed as Head of Drama, Entertainment and Indigenous in 2016. Since her tenure, Riley has presided over the development and production of a slate of premier ABC titles including AACTA-award winning Stateless; Mystery Road; Total Control; Aftertaste; Rosehaven; Frayed; Fisk and Wakefield.

The Newsreader, an upcoming 1980s period drama, starring Anna Torv and Sam Reid, and gripping six-part anthology, Fires, which chronicles the unprecedented Australian bushfires of 2019/2020, is slated to premiere later this year.

Riley drives the need to identify and commission projects with distinct digital release strategies– using the creators’ platform to launch and point to iView (ABC Australia’s OTT platform) to attract a new, mass and unique audience to the ABC.

Her drive is to bring compelling stories to life and to forge a culture that prioritises the need to strengthen the diversity of voices across age, race, gender and ability both on and off the screen.

In 2020, Riley was inducted as a new member of the Academy of Motion Pictures Arts and Sciences for her outstanding contribution to the art and science of motion pictures and in recognition of her drive to champion diverse storytelling in Australia, with an impact across the international landscape.