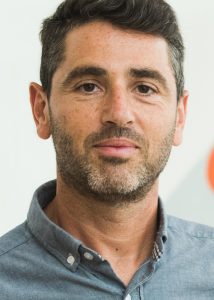 Steve leads Somethin’ Else’s podcast productions include their self published titles, which has seen the company have numerous podcast hits.

Steve joined in 2000 and became Managing Director in 2006. In that time he’s been part of the team that has evolved the company into a BAFTA and Cannes Lion award winning agency.

Steve is a regular panellist on The Media Podcast, a fellow of The Radio Academy, a long suffering West Ham fan and plodding runner!